Design is a state of mind

1.How did thinking in terms of shots and scenes influence your approach to communicating your design concept?

Thinking in terms of shots and scenes are easy to present our ideas and concepts well, and the audiences could understand our design clearer. The storyboard better generate our design concept into scenes in real life, it’s a good method to let us think about our design concept that related to our daily life.

2.What motivated your choice of storyline structure? Can you think of an example from a film that uses the same structure?

Following the guideline of What, When, Where, How and Why, our group decided our storyline structure based on our design concepts and fully discussion. Meanwhile, we also influenced by many films which we could not remember their name, but the structure and scenes actually help us a lot.

3.What choices did you make about audience and style? Were they related?

Depends on our audience is female, our choices were more focus on that. They must be related, because it’s important to present ideas in a suitable style that based on what information our audiences could accept.

(There is not enough space left for uploading photos)

1.Choose one of the objects you selected and describe how your initial understanding of its affordances changed over the course of the exercise?

One of the objects that I selected is the rice spoon. My initial understanding of the affordances of a rice spoon is to dish up rice. After the course of the exercise, I used plastic wrap to change its appearance, and I think it can be used to electrostatic eliminating for clothes and hair.

2.Given that affordances is a relational property between a person and an object, how did the manipulation of the object and the person’s abilities inform your understanding of the concept? Did it give you inspiration or insight for how to work with affordances as a designer? Discuss this through the specific objects you explored in the exercise.

Manipulation of a toothpaste without thumbs is really hard, I used sticky tape to stick two chopsticks on my two fingers, and then I used these two chopsticks as my fingers to use toothpaste. I found out that it was also really difficult to use. After this exercise, I think it did inspire me. I was wondering if toothpaste can be designed as a new kind of toothpaste which do not need to be squeezed. To sum up, I think we could come up some special ideas through some unlimited test and experiment, it’s good for a designer to think unrestrainedly.

1.What kinds of information and insights did it give you about the usability of the prototype?

User observation and Think aloud these two processes provide us different ways to observe user. For the user observation process, we can observe user’s facial expression to know the feelings and thoughts of users. For example, we could know that user might face some difficulty while using the interface when he was frowning or thinking for long time to continue. For the think aloud process, user could directly tell the observer what he feel and what he thought, and it’s easier to capture the real thoughts from users.

2.What aspects of the technique worked well or were frustrating?

For the user observation process, the observer might misinterpret users’ feelings. For example, most of people would frowning while thinking, but it doesn’t mean there are some problems with the interface design. So, I consider the process of user observation might misinterpret users’ feelings and thoughts in somehow. For the process of think aloud, I think this technique worked well than the other one a little bit, because it’s clearer for observer to understand what users’ feelings and thoughts. And it’s easier to capture users’ ideas through verbal expression.

1.How did physically acting out help to explore ideas?

Physically acting gives us a chance to simulate real scenario, and it also let us get closer to our users. From practicing, we seem to find out more problems and design ideas, and we generated the ideas which are more relevant to users. Before acting, we imagined many problems, but the results of physically acting told us conjecture cannot replace the real situation.

2.Did you refine your ideas and solutions to the problem through bodystorming? In what way?

Bodystorming provides us the ideas which are more relevant to users, and these ideas might be more useful. Before acting, we assumed some possible problems and solutions, but we refined our ideas after acting, because some solutions were not working so well when the problems actually occur. So, we refined some ideas depend on our acting.

3.What was difficult or challenging about bodystorming?

Bodystorming requires us to simulate real scenario, it’s really difficult for us to act well or act naturally. Because some of us are not good at acting, and it’s quite hard to act like a real scene. So the difficulty of acting might lead to some misleading ideas or ideas missing.

4.Does bodystorming lend itself to certain types of problems?

I think bodystorming actually lend itself to certain problems. Because most of us are not good at acting or familiar with the real scenario which we are going to act, and these barriers might hinder us to explore problems and ideas. Nevertheless, bodystorming still a useful technique to find out problems and ideas which are more relevant to users.

1). How did taking the position of an extreme user influence your thinking in relation to the design challenge? Was it different to how you usually generate ideas and empathy?

It is quite different to generate ideas by taking the position of an extreme user. Mostly, I would not pay much attention on such an extreme user group, because they could not represent the public users. From looking at an extreme user, it provides me a chance to think differently and explore new design possibilities.

2). Did any of the other design thinking techniques (design provocation cards, stories, storyboards, etc.) help you to work through ideas and collaborate with your group members?

Design provocation cards is a good design thinking technique for our group members to come up many ideas in a short time, and it is also a good method to record ideas concisely. About the storyboards, it’s a useful technique to represent our ideas with stories, and we can understand other group members’ ideas from their storyboards. Compared with text, storyboards provides us not only an interesting way to represent ideas but also make us understand of others’ ideas easier. 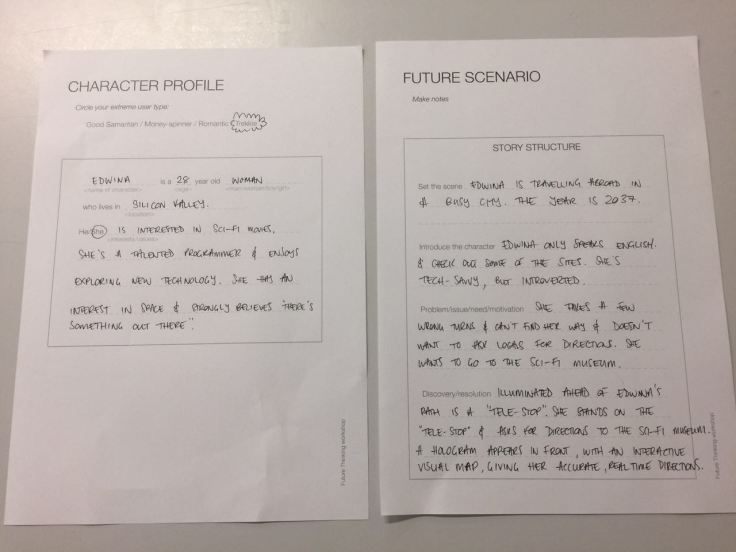 Briefly reflect on the lessons learnt from each exercise

Reflective listening is a good way for us to pay attention and listen carefully from the speaker. When we tried to listen what speaker have said and tried to know how they feel, we are getting closer to speaker, and gain empathy from what they have experienced. At the same time, I could feel when I was speaking and that would made my interview involves more emotion and feelings. And the listener could get to know more about me from my speech which involves emotion and feelings.

b. Defamiliarization of everyday reality

This exercise makes me realize that I have ignored many details in my everyday life. After watching two videos, I exist some feelings and thoughts that I might ignore when I actually taking a bus or train. That’s a good way for us to find out something that it’s easy to ignore, and let us have the other angle to explore our daily life.

After protecting my mobile phone camera lens and sunglasses with cling wrap, I realized that the world that I used to know has totally changed. To explore a familiar place from an unfamiliar perspective is quite interesting for me, and this exercise let me realize that I could see things in different ways. In the aspect of design, we also need to see things differently, and try to explore ideas in different angles. And different people might have different point of views and different angles to explore things, so we need to get to know what they want and what they need, and try to get closer to our audiences.